There’s a place in China where the sky is blue and  cool, coastal breezes chase out the fevered heat that suffocates millions of residents jam-packed in the Middle Kingdom’s other metropolises.

This place is Dalian.

My friend, fellow China Daily intern and UI classmate ended her internship at CD and packed up to head back to her home city  last week and invited me along for the ride. I got off work early Friday and hopped on a train at the Beijing Railway Station for a six hour journey snaking along the coast to the peninsula that houses Dalian. The city is  in Liaoning province, which shares a border with North Korea.

The city of around 5 million people is a major seaport and is known for its seafood. The moment Siwen and I stepped off the train, her mother greeted us with hugs before promptly handing us grilled squid from the local vendor.

We did most of our sightseeing Saturday. Apparently it was hotter than normal but the fairly frequent coastal breezes were heaven-sent. Siwen’s cousin drove us around in his car and we first stopped at a tourist area where we could look out over beautiful views of the ocean. Staring out over the vibrant greenery and the hues of blues, I easily forgot about the searing heat Beijing couldn’t seem to shake in the last few weeks. Did I ever want to leave?

After lunch we headed for some closer views of the beach. I haven’t frequented much of the U.S. West Coast beach scene, but driving through Dalian and checking out the local beach gave me a Santa Monica pier/L.A. vibe. Fancy resorts hovered high over the seascape and people and cars packed the city. Dalian is in the process of constructing a subway, which I was told is slated to open next year. 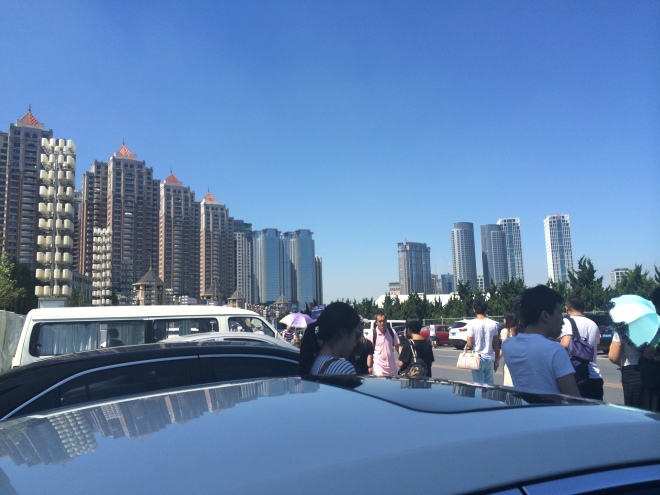 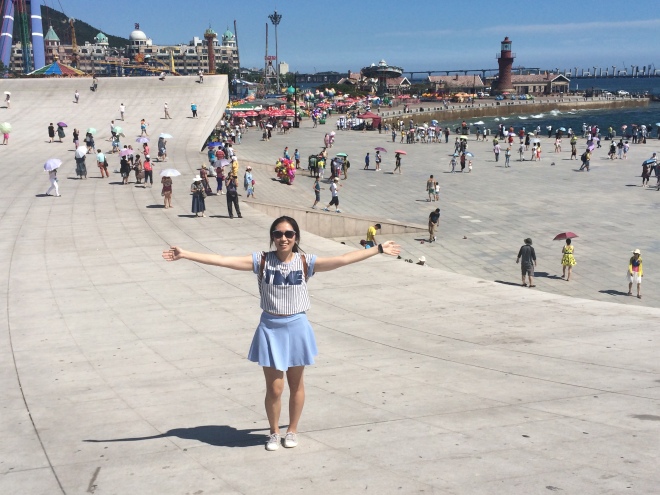 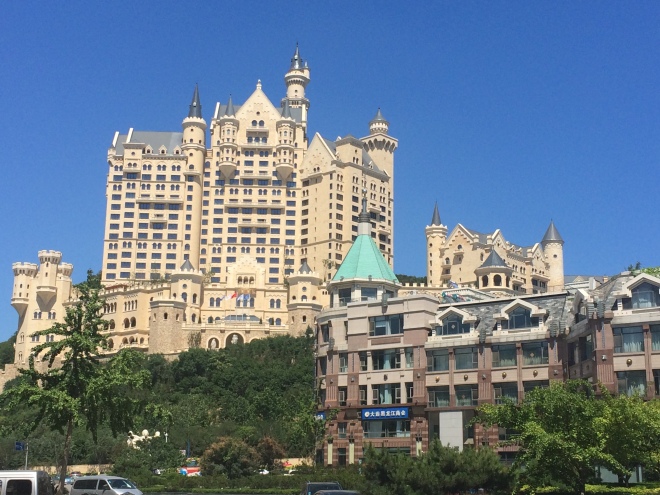 We walked along the beach and rode a tandem bicycle around to enjoy the  people and the ocean view. It was my first driving experience in China and thankfully I managed to not run anyone over. Several hours later, exhausted, thirsty and sun burned we grabbed some green tea popsicles and headed back home.

That evening we celebrated her grandfather’s 82 birthday. We had a massive dinner with her aunt and uncle, cousin and his girlfriend, her parents and grandparents. Sticking with Chinese tradition,  we sang “Happy Birthday” and ate a slice of cake first before digging into the dozen or more dishes the waitstaff had packed onto the lazy Susan. The dishes were all delicious and I ate seafood among other meats and tofu.  It’s also Chinese tradition for the restaurant to serve birthday patrons a bowl filled with one long noodle, wishing the person live a long life.

Although most of Siwen’s family couldn’t speak English, or had a limited vocabulary, they welcomed me with open arms and warm smiles. We toasted often, raising our glasses filled with Tsingtao. 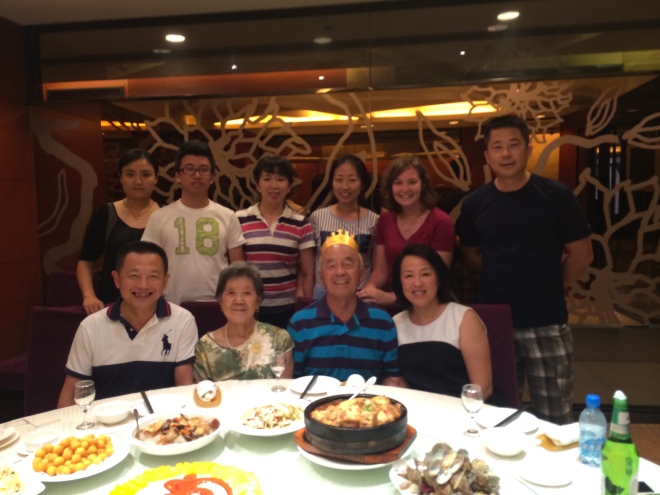 It was overall a perfect day and I was ready to take in some more of Dalian Sunday before I left. Unfortunately, fate had other plans.

It’s no secret China’s cuisine has put many expats and foreign tourists through the wringer a time or two. It’s notorious food quality standards and streets filled with food vendors carrying a roulette of mystery meats has beaten Western stomachs to a pulp. Less than two weeks until my return to Iowa and I’d managed to avoid a dramatic experience. So it was only fitting I be included in this unfortunate travelers club.

I woke up in the middle of the night feeling a bit stuffy and uneasy. I sat up in bed, groggy but having a bad feeling something wasn’t right. I soon enough discovered my stomach wasn’t at all happy with me and I spent the next two hours hugging the toilet. A battle was raging in the bowels of my stomach, one I had no choice but to be the active bystander and wait until my body had casted out all of whatever I didn’t have the foresight to avoid.  At one point, resting on the cool tiles of the bathroom floor, I tried to see the humor in the situation and how I’d be laughing it off soon enough. It was a thought that failed to provide any comfort and so I returned to submissively waiting for my stomach to stop feeling like it was going to burst out of my body.

I finally emerged from the bathroom, where daylight cheerfully greeted me as I slinked off into my bedroom and shut the door.  The remainder of my day in Dalian wasn’t spent eating breakfast Siwen’s adorable grandmother had made. It wasn’t spent galavanting around Dalian, buying souvenirs and shopping at the local market.

I spent the rest of the day rotating between sipping glasses of hot water, the bathroom and catching glimpses of sympathetic family members before I slipped back into bed. No one else felt ill the next day so I was alone in my misery.

Laying in bed, I feebly waved a hand-held fan I’d gotten from the living room, trying to cool my exhausted self as the sun warmed the bedroom. Hello Kitty, Mickey Mouse, Spongebob and several popular Asian cartoons printed in red on the fan stared back at me. Chinese characters scrawled underneath their smiling cartoon faces read,  “all people must work together,” or some similar Communist-themed montra.

China had beat me, I thought, as I slowly fanned myself. My attempts to readily eat anything put before me and try all sorts of emersion activities to fully experience this different culture didn’t matter. China found my weak spot: a stomach that could handle tons of processed chemicals, cheese, and diet soda but not whatever I had eaten within the last 24 hours.

I finally managed to pull myself out of bed to dress and splash water on my face before hopping into the car and off to the airport. I felt horrible, literally, but also for ruining my last day and the otherwise enjoyable weekend.  My hosts hugged me and — despite the Sunday I’d spoiled —  sent me off with an open invitation for me and my family to stay at their apartment if ever in Dalian again.