Blogger’s Note: So I started writing the first two paragraphs exactly one week after we arrived back. But job searching and general bouts of laziness pushed the publishing of this post to now… one month later. I’m keeping the beginning because it’s still just as cold ( feels like -5) as it was when I wrote this a month ago.

This time last week I was sprawled out on a beach chair with a book on my lap, a view of the ocean, and the only things covering me were a bathing suite and 70 SPF sunscreen (I sizzle easily). It was 80 degrees and a sloth was dozing off in a tree probably 20 feet above me. Was it heaven? For an Iowa girl who’d endured subzero temperatures only two weeks prior, Costa Rica certainly was heaven wrapped in sugar-laden pina coladas and all the mahi mahi you could ever want (too much mahi mahi by the end of the week). We traveled to Manuel Antonio, Costa Rica to celebrate Derrick’s friend getting married … but to be clear, sun and sand in January wasn’t a hard sell either.  We flew from Chicago to San Jose, crashed at a hostel for a night before flying out on a tiny hopper flight to the coast.

Since too much time has passed since the trip, I won’t prattle on about our experiences. But some notable highlights:

– Derrick used a screwdriver at work the day we flew out of O’Hare and forgot he had it in his carry on until the security check found it and kept it. R.I.P screwdriver.

– We arrived in San Jose in the wee hours of the morning and crashed at a hostel near the airport. Sounds convenient until your alarm clock is a large jet that takes off right over your head at 6 a.m.

-Despite spending a week in Costa Rica during the ‘dry season’, it seemed to rain a lot. Every day. I can’t complain though, it didn’t last long and I was just happy to be walking around in shorts and sundresses. Not to mention a sudden downpour led us to unknowingly take  shelter in a gay bar, which had amazing happy hour specials ($1 margaritas? Por favor y gracias!) pretty good food and a bathroom with posters of Calvin Klein underwear models in the bathroom.

– I went hoping to brush up on my Spanish, but Manuel Antonio is basically a resort area so everyone knew English. I felt bad about only talking in English until I realized the waiter knew English 10x better than I knew Spanish and me fumbling with grammatically insufficient Spanish would a) be humiliating and b) just waste their time. I did get to use it once. On the last day, Derrick and I hopped on the public bus and zoomed down the mountain to nearby Quepos so we could print off our airline tickets at an internet cafe. A combination of my basic Spanish, hand gestures and Derrick’s sense of direction,we found it.

– I finally met a lot of Derrick’s friends who I’d heard about for years. Most lived in New York and a few other places. Although expensive, I’d definitely recommend a destination wedding to anyone. It was awesome to get to know the bride and groom (whom I’d never met before but allowed me to be a part of their big day anyways) and be genuinely excited for them by the end of the trip when they got married. Being a Plus 1 is always great at a wedding, but it always feels like you’re just generally happy for the couple if you don’t really know them. Lucky for me, I got to sip margaritas and snorkel with the soon-to-be Piaseckis before seeing them say, ‘I Do.’ 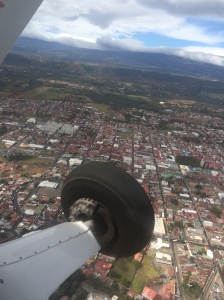 Sunset on the catamaran

Eating so-so flan on the catamaran

Beach in January is a lot for this Iowa girl 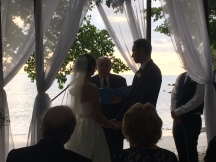 Oh yeah, and the Piasecki’s got married on the beach.

Post-reception drinks in an airplane

Sloth action during our nature hike

People crowding around to see the sloth.