I’m a fan of food and thankfully China is chock-full of it.  Here’s a summary of some pretty good eats I’ve had here and my favorite food. I guess a better title for this post would be, “Food Brag.” So when you come to China, here’s some things to start you off with on your adventure.

Peking duck is probably one of my (many) favorite foods in China. I doubt PETA is a fan, as the dish includes force feeding the duck several times a day to get it nice and plumb before being slaughtered and  cooked in a particular way. Wikipedia has the details if you want to check it out.  It’s delicious and I’ve had it several times. You can have the dish in Iowa City, but at most places you have to order it 24 hours in advanced. 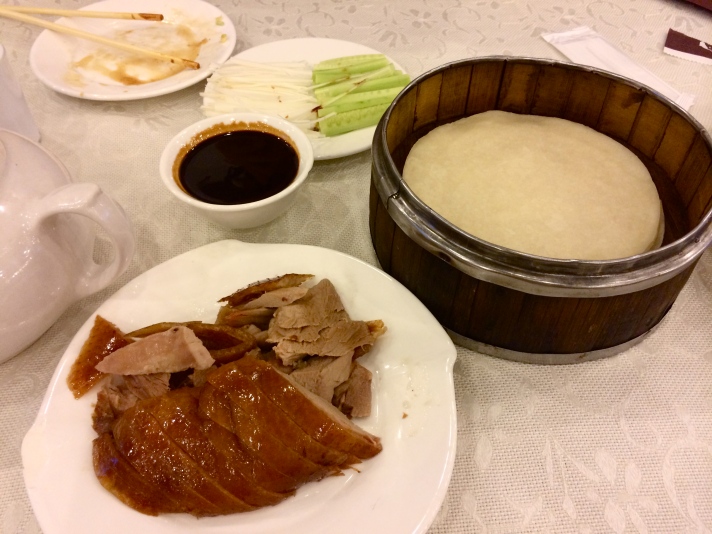 Peking duck is kind of like a Chinese taco in its own way, with the tortilla-like vessel that you wrap up the duck slices with once you’ve dunked them in delicious plum sauce. 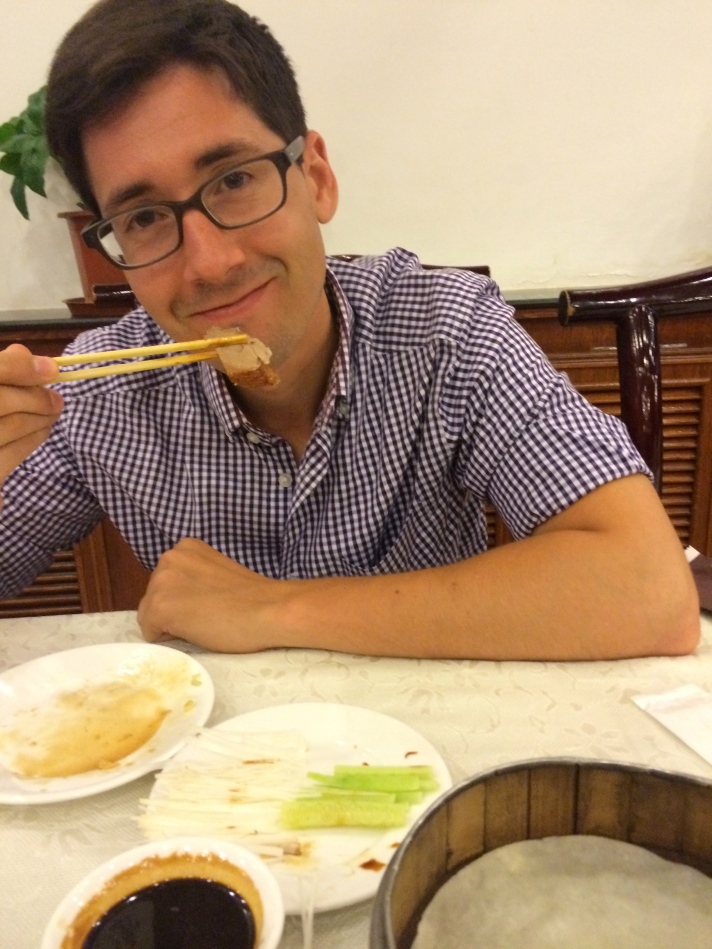 Derrick is also a fan of Peking duck.

Tofu is greatly undervalued in America. I really didn’t think about tofu until I came here — it’s everywhere and it’s delicious. The only tofu I had at home was more of a blob and tasteless. In China, I’ve had it served with a lot of wonderful dishes and have been surprised at all the forms it takes. I guess part of the problem is that it’s an alternative to meat in America — but China isn’t really hip for vegetarians.

Here’s a meal my friend Siwen made for me one night. It includes two types of tofu.

There’s a lot of spice here so make sure you arm yourselves with Pepto and anti-acid pills. I’ve come to use them over the past month. I consider myself someone who enjoys a little spice, but China spice packs a little more heat than I’d anticipated.

Sichuan food is known for its spice. I wouldn’t have minded eating Sichuan, but my stomach would have minded a great deal.

This is a southern-style dish, if I remember correctly. It has little peppercorns that sucker punch your tongue if you accidentally eat one. 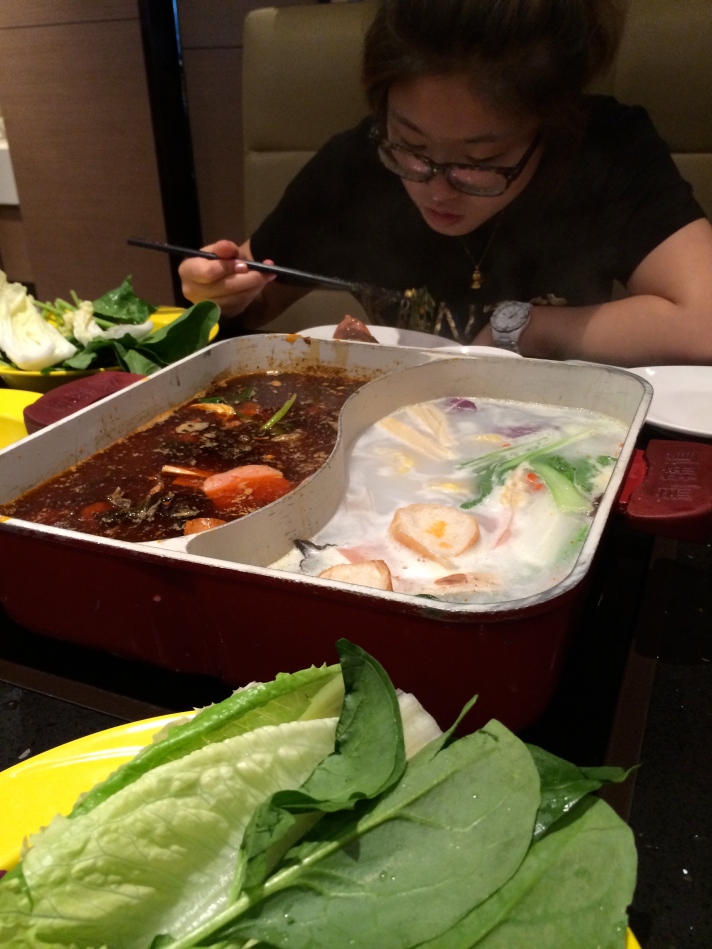 Hot pot is a DIY dinner. You boil the water at your table and pick out veggies and meat and cook them at your table. Grab some chopsticks and enjoy. This one is split down the middle with the left the spicy side and the right just boiled water. The spicy side is definitely more flavorful.

I already gushed about dumplings in my Shanghai post so check that out if you want a refresher. Dumplings, I think it’s safe to say, is the expat food of choice. It’s not too adventures but 110 percent tasty. I heard through the grape vine the Iowa City Farmers Market now has a dumpling food stand — but it’s worth traveling to China to get the real thing. 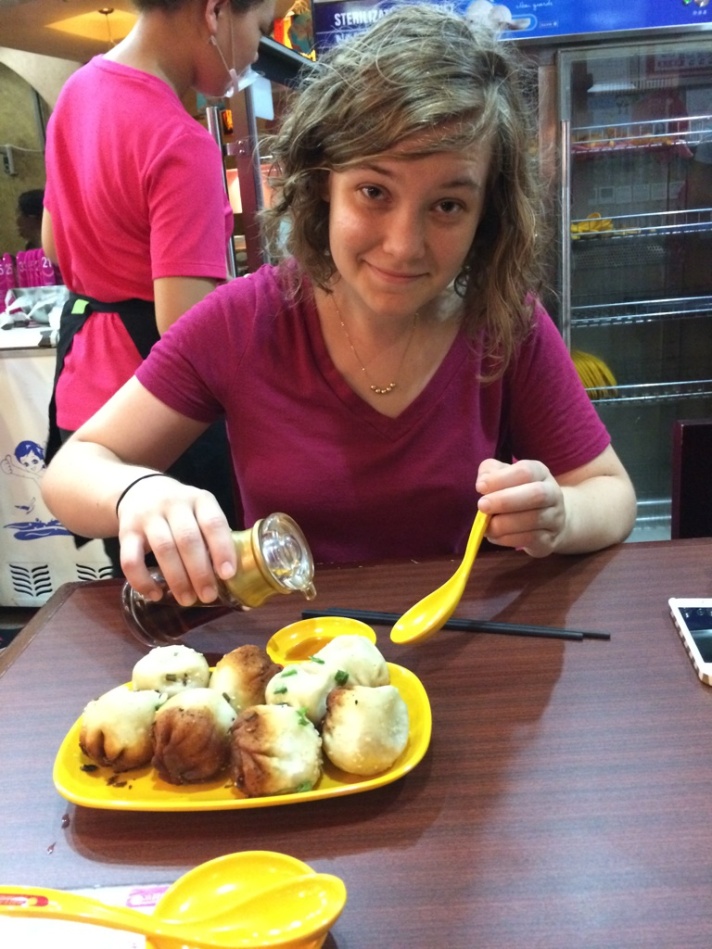 Here I am at Yang’s Pan-fried Dumplings in Shanghai. There is a process to eating these, which I am happy to practice repeatedly.

Here are Din Tai Fung’s dumplings, which were light but super satisfying. I’ve had these in a chain joint in Beijing, but there just not as good.

I approach street food with caution. I have loved all that I’ve eaten, but I’ve also been wary that said vendors don’t necessarily stick to a hygienic code of conduct.  I’ve heard of too many expats who all had an unfortunate run-in with street food (usually meat-based) and had a stomach problems for a few days.

I don’t know what this is called but we enjoyed it. It’s basically an egg, cabbage, tofu, mushrooms, and thin potato slices tucked in between a flaky bun that has a light coat of chili paste on the inside. Quick and cheap (about 5 yuan).

In my neighborhood there is a small local market that’s surrounded by vendors who sell a variety of things like meat skewers, steamed buns, pastries and nuts. The sidewalk outside the market is always flooded with activity in the evenings and neighbors and friends gather and squat on the little wooden stools to gossip and drink pijou (beer). Two fellow China Daily interns and I did this once as we snacked on wet peanuts that appeared to be soaked in some sort of oil with anise. It was great (and cheap). That big bottle of Yanjing was 5 yuan ($0.83).

STINKY TOFU! You either like it or you hate it (many don’t). I enjoyed it.

A wrap of sorts. This is a hot dog-like meat with lettuce, a bean paste and onions.

I’m not sure this has a name, but it’s a thin, flaky pastry with a thin coating of hard sugar in the middle. 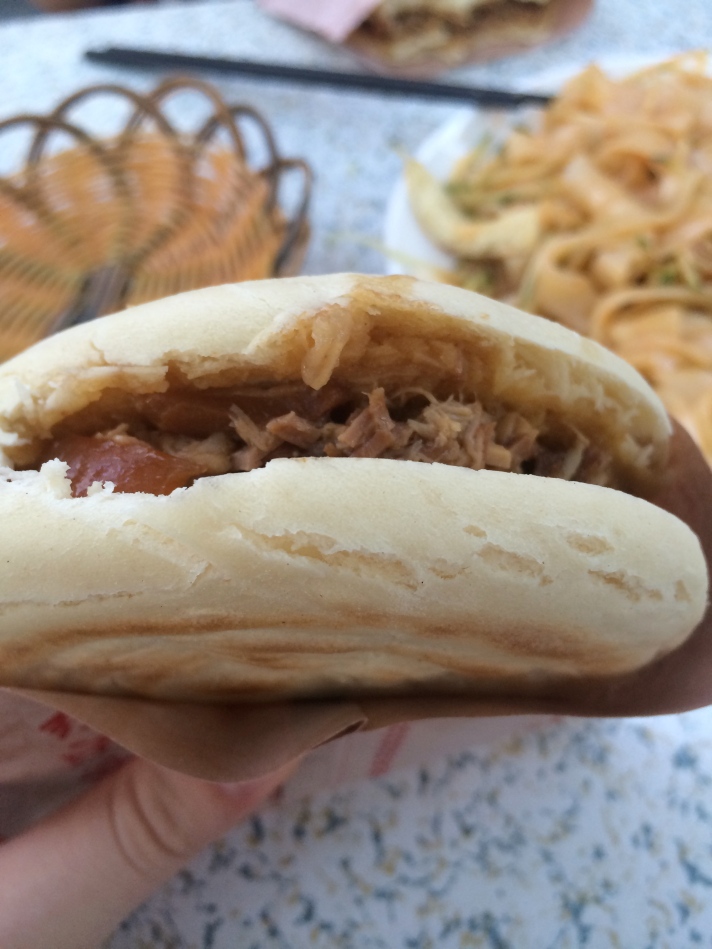 Roujiamo is China’s take on the hamburger. The bun is a flatter  English muffin.

In America “Chinese food” always has rice largely because many Chinese immigrants are from the southern part of China, where rice is a staple in the southern diet. In the north, however, noodles are necessary. 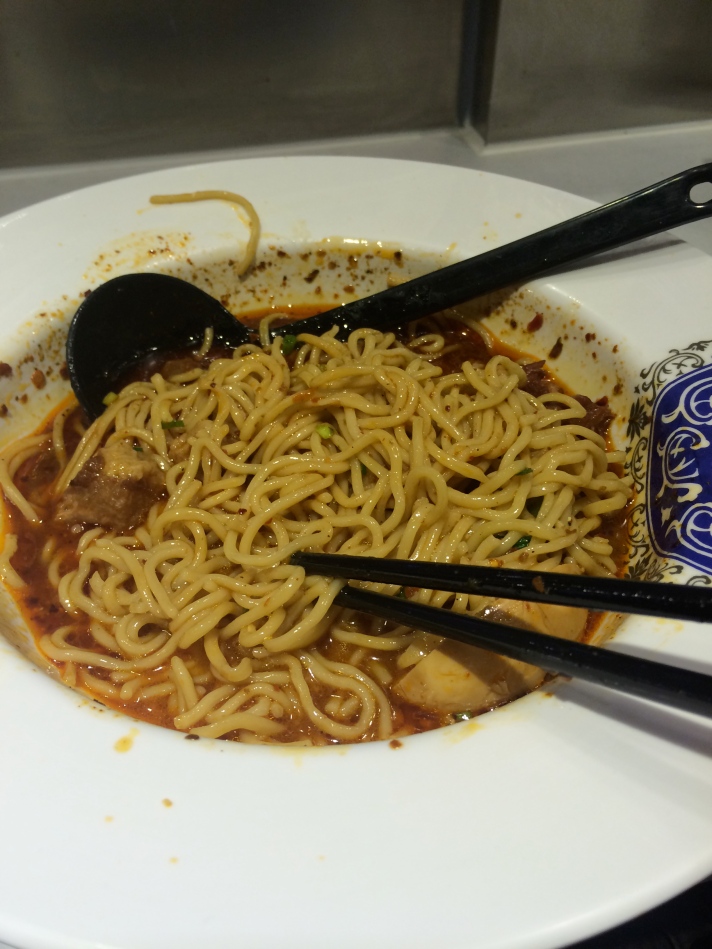 Here’s a big noodle bowl at a local ‘fast food’ near China Daily. When I want something relatively cheap and super filling, I go here. So good.

This is a type of cold noodle dish. It’s made with potato flour and has a lightly spiced sauce and is garnished with cucumbers and tofu (it looks like bread). Unrelated, I was slurping up noodles that day and a rouge noodle flipped the chili sauce in my eye. It was a little painful, so avoid this scenario if possible.

Honestly, you can’t come to China and not at least try some interesting food that you never really planned on eating. I swore to myself I’d try anything once. Often I don’t really like it, but I feel better about not wimping out. I’ve had duck neck, brain, tongue and blood. Duck neck isn’t too bad. I don’t really care for the rest. But I tried it and everyone should.

I’ve also had tripe and intestine (both not pictured). I actually really liked lightly fried intestine. 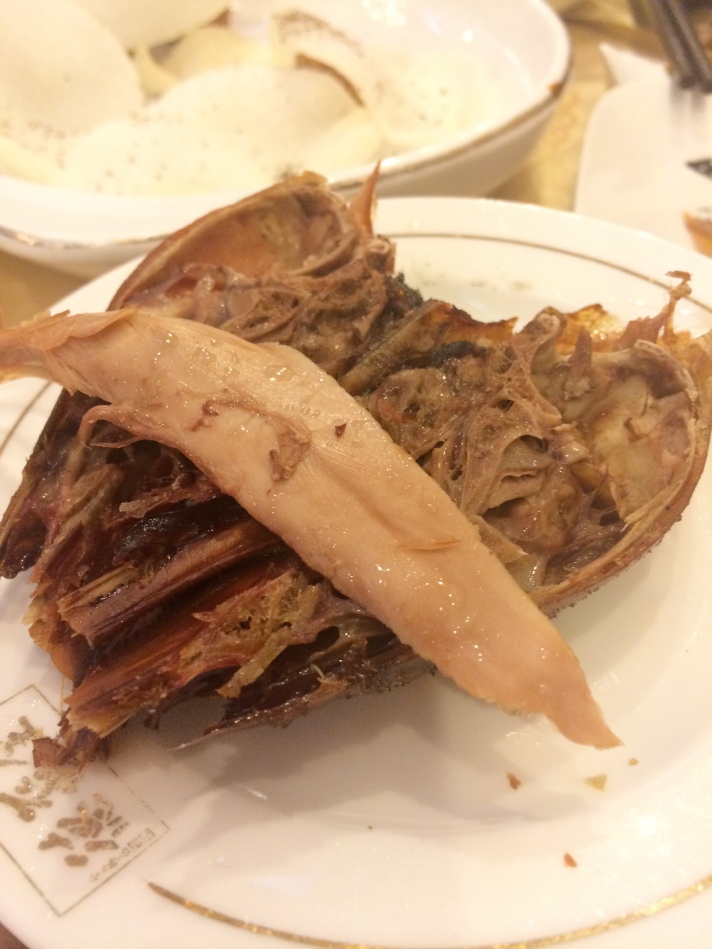 This is brain. It’s mushy.

Duck neck is on the left and duck tongue is on the right. I didn’t like the tough muscle.

DISCLAIMER: These are only a sampling of the dishes I’ve had so far. There’s Yunnan,  Uighur and many other kinds of food. I didn’t take pictures of them all and there are so many other foods I won’t get to sample during my time.